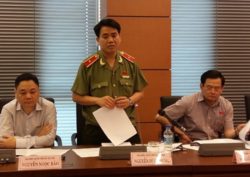 Recently, Vietnam thirteenth Congress is being held the ninth meeting considered the “Criminal Law (Amendment),” the draft, the draft proposes the abolition of the death penaltysentencing of some crimes, which in addition to robbery, outside of undermining national security vital public facilities, insubordination, collaborators, war crimes, drug trafficking and other crimes, most attention is corruption, corruption crimes abolish the death penalty proposal.

Vietnam’s corruption, corruption is serious, the industry widespread corruption, bribery phenomenon. The Vietnamese government also seems to be the lack of effective anti-corruption approach, and the existing measures and the lack of execution and deterrence. In this case, the Ministry of Justice for embezzlement sentencing submissions, no wonder it caused uproar in the Vietnamese community.

Vietnamese President Truong Tan Sang in 2011 has also pointed out, “In the past a bug bad pot of soup, and now many of the bugs. A bug has been dangerous, full of bugs would destroy the entire country.” Thus, Vietnam’s emphasis on corruption,corruption, and so modify “Criminal Law” the death penalty for the crime of corruption sentencing confusing.

The vast majority of Vietnamese people believe that the abolition of the death penalty will not be conducive to corruption and criminal social justice. Vietnam Internet users believe that the person committed the crime of corruption of public officials are generally in the hands have a certain power. Their understanding and application of the law often higher than ordinary people. These people break the law, the law would also reduce the punishment for these people, which is how fairness.

Reason not to agree to the abolition of death penalty crimes of corruption are also concentrated in this practice reduces the deterrent force of the law. Chen traveled to Vietnam to Congress that all penalties for serious crimes should have deterrent effect. Vietnamese legal punishment is still in “heavy effect, light motive” stage, abolish the death penalty the crime ofcorruption, it is difficult for corruption offenses motive serve as a warning, but not conducive to change the concept of the rule of law in Vietnam.

However, some experts believe that Vietnam abolish corruption crimes punishable by death another meaning. Due to a serious problem of corruption in Vietnam, many corrupt officials often go into hiding abroad and return home to face the death penalty on the grounds and applied for asylum, which makes Vietnam and many countries had a lot of difficulties in the actual process of signing extradition regulations and operations. Therefore, the Vietnamese want to abolish the death penaltythe crime of corruption may also have to consider the problem solved. In addition, the Vietnamese government also hopes to reduce the penalty to avoid the kind of progressive Western criticism of its democratic status of the country.

From the practical point of view, in Vietnam, the crime of corruption has been difficult to actually get the death penalty. Although many corruption cases in line with the sentencing of the death penalty will be a variety of reasons often eventually commuted to ten or twenty years’ imprisonment, and so for corrupt deterrent sentencing is very limited, not to mention if you really abolish the death penalty sentencing embezzlement it will be difficult to have a deterrent effect in such cases. Of course, also with a view, it is now difficult due embezzler eligible for the death penalty, and therefore does not have the executive power of sentencing, there is no longer necessary, or will pose a challenge to the seriousness of the law.

Vietnam “Criminal Law (Amendment)” sentencing guilty of corruption related to the death penalty against the draft if implemented, could depend on public opinion, as well as members of Congress vote.