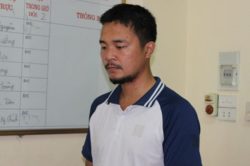 On May 9, authorities in Vietnam’s central province of Thanh Hoa arrested Nguyen Duy Son, a former official of the Sam Son University, on allegation of “Abusing democratic freedoms to infringe upon the interests of the State, lawful rights and interests of organizations and/or citizens” under Article 331 of the country’s 2015 Penal Code.

Mr. Son will be kept incommunicado for investigation at least in the next four months, according to the common practice in political cases.

According to state media, from December 2017 and March 2018, Son had used his Facebook account “Nguyen Son” to disseminate the information to distort leaders of the ruling Communist Party of Vietnam and Thanh Hoa province.

He was said to get information on social networks and re-post on his Facebook page with additional comments based on incorrect facts to defame state and party officials.

Son was a former official of the Sam Son University, which serves for students coming from ethnic minorities. He was reportedly fired in unclear circumstance.

Recently, many senior officials in Thanh Hoa province, including the party’s chief and the chairman of the People’s Committee, have been reportedly involved in corruption and adultery. Residents in many communes have been forced to contribute many groundless fees.

Vietnam has used Article 88 and 258 of the 1999 Penal Code or Article 117 and 331 in the 2015 Penal Code to silence government critics. The implementation of these articles in the national security provisions could effectively put any resident face imprisonment.