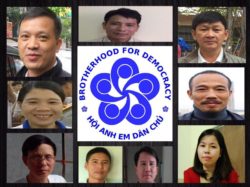 Jailed members of Brotherhood for Democracy, six of them convicted on April 5, 2018

On May 11, Vietnam’s authorities blocked many relatives of jailed members of the unsanctioned online group Brotherhood for Democracy, not allowing to participate in a meeting with foreign diplomats.

Speaking with Defend the Defenders, Mrs. Khanh said her appartment was blocked by uniformed police officers and plainclothes agents in early morning of Friday and when she tried to go out, they stopped her, saying she cannot leave her house today.

Meanwhile, Mrs. Trang told Defend the Defenders that a group of around ten police officers from the Ministry of Public Security, the Hanoi Department of Public Security and lower levels stumped in her private residence in Chuong Duong commune, Thuong Tin district and told her not to leave her house.

Police officers did not specify reason for placing her under house arrest, just saying they have received orders from their supervisers.

They kept her inside her house until noon despite strong protest from her. Trang said they rudely requested her two children to go to school.

Defend the Defenders has learned that diplomats from the embassies of the US, Australia, Germany, Sweden and other countries attended the meeting held in a place near the US Embassy in Hanoi. The mother of Ms. Le Thu Ha, wives of Protestant pastor Nguyen Trung Ton and Truong Minh Duc overcome police’s surveillance and successfully presented at the event.

The event was made few days ahead of the US-Vietnam Human Rights Dialogue scheduled in Washington DC on May 15. During the meeting, the diplomats got the update information about the jailed activists from their relatives.

Mr. Troi, Mr. Duc and Mr. Ton were arrested on July 30 last year while Ms. Ha and Mr. Dai were detained on December 16, 2015. On April 24, the People’s Court of Hanoi convicted them on allegation of subversion, and sentenced them to lengthy imprisonments.

Mr. Hung was arrested in early January this year in a trumped-up political case in which he was accused of “inflicting injuries.” On April 12, he was sentenced to one year in prison.

The activists are senior members of the unsanctioned organization Brotherhood for Democracy, the main target of Vietnam’s ongoing crackdown on the local dissent.

All of them are considered prisoners of conscience by Amnesty International.