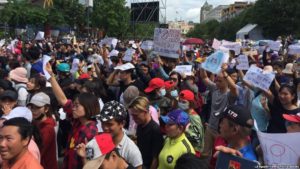 The law, passed by the National Assembly, the country’s highest legislative body, on June 12, consists of seven chapters with 43 articles and will take effect on January 1, 2019.

The law, identified as a copy of China’s Law on Cyber Security, criminalizes “denying the revolution’s achievements,” “offending national heroes” and “providing misleading information liable to cause confusion among the population” which are vague formulations that could be applied to almost anyone posting information online that displeases the ruling Communist Party of Vietnam and its government.

The law also requires online platforms such as Google and Facebook to censor any content regarded by the Vietnamese government as “toxic” and “harmful,” to store Vietnamese users’ data in the country, and to hand the data over to the Vietnamese authorities on request.

In addition, tech companies are eligible to remove online postings considered as harmful for the regime.

Because of these requirements, the law is considered as a tool to silence the local dissent and violates the right to freedom of online expression by domestic public and international human rights organizations.

After the law was approved by the majority of legislators, tens of thousands of Vietnamese have signed a joint petition calling President Tran Dai Quang to freeze the law.

On June 10, tens of thousands of Vietnamese workers rallied on streets in Hanoi, Ho Chi Minh City and other cities in a mass demonstration biggest for decades to protest two bills on Special Economic Zones and Cyber Security. Police responded aggressively, detaining hundreds of them who were interrogated and most of them were tortured by police officers. Dozens are still in custody and probed for allegation of “causing public disorders,” “disrupting security” and “resisting officials in duty.”