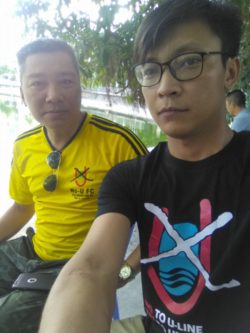 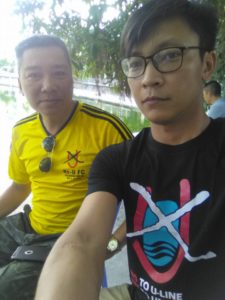 Police in Vietnam’s northern province of Hoa Binh have detained pro-democracy campaigner and independent blogger Bui Quang Thuan for hours, confiscating his laptop and some T-shirts, the victim told Defend the Defenders.

Mr. Thuan, 40, told Defend the Defenders that he was detained at around 4 PM of July 27 when he was staying in his friend’s residence in Bảo Hieu commune, Yen Thuy district.

Security officers from Hoa Binh province’s Department of Public Security stormed in his friend’s house, searching the house without approval from the local Procuracy.

They confiscated his laptop and several T-shirts with logos which protest the bill on Special Economic Zone and China’s U-shapped line in the East Sea (South China Sea).

Later, police officers took him to a local police station where they interrogated him about his T-shirts until 9 PM.

On July 28, police forced him to go to the district police headquarters for interrogation about from where he got the T-shirts. The activist replied that some of his friends gave him but he forgot their names.

Police released Thuan at the noon of July 28 but did not return his laptop and T-shirts.

Mr. Thuan is a member of the online group Brotherhood for Democracy, one of the main targets of the ongoing government crackdown on local dissent.

Thuan is a former teacher from the Muong ethnic minority. He is also an independent blogger making daily news bulletins about Vietnam on his Facebook account Thuan Van Bui. His bulletins are informative and critical to Vietnam’s government, observers said.

The Vietnam-China relations are complicated. Vietnam’s communist regime consider China as their closest political ally which provided huge support to Vietnamese communists in the two wars against France and the US in the 20th century.

After taking over the South Vietnam and reunited the country in 1975, Hanoi went under support of Moscow and turned away from Beijing.

On January 17, 1979, China sent around 600,000 soldiers to invade the six northernmost provinces of Vietnam, killing tens of thousands of soldiers and civilians and demolishing all infrastructures there before withdrawing two months later.

China also invaded some islands controlled by Vietnam in the Truong Sa (Spratlys) in 1988. In recent years, China has turned these islands into artificial islands where Beijing deployes heavy military weaponry, including jet fighters and long-range missiles.

Along with militarizing the East Sea, China has also attacked Vietnamese fishermen who are working in their traditional fishing grounds. China claims nearly the entire East Sea based on its historic ground which was turned down by International Court of Arbitrary in The Hague in 2016.

Vietnam has verbally protested China’s violations of its sovereignty in the East Sea. At the same time, Hanoi has suppressed activists who protest China’s expansionism in the resource-rich sea.

Tens of anti-China activists have been harassed and imprisoned in recent years.

In response, Vietnam’s government brutally dispersed the peaceful demonstrations, arresting and barbarically beating hundreds of protestors. Tens of protestors have been convicted on charges of “causing public disorders” or “resisting state officials on duty.”