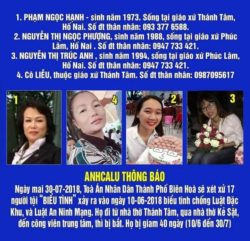 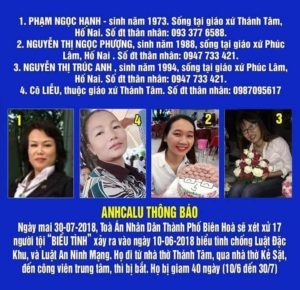 The People’s Court of Bien Hoa city in Vietnam’s southern province of Dong Nai has convicted 20 local residents on charge of “Disturbance or public order” under Article 318 of the country’s 2015 Penal Code for participating in a peaceful demonstration in mid-June.

In a so-called open trial but only few relatives of some defendants were allowed to enter the courtroom, the judge said the defendants were guilty of holding up banners, shouting slogans and blocking traffic for hours in the city of Bien Hoa, and sentenced 15 to between ten and 18 months in prison. The remaining five, three pregnantand two under 18 years old, were given one-year probation. 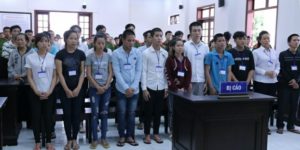 As many as 18 Catholic followers, including 11 women, are among the convicted.

The court also decided to confiscate motorbikes of some defendants who were with their vehicles before being detained.

On June 10, the defendants joined with hundreds of protestors from Ho Nai parish to protest two bills on Special Economic Zones and Cyber Security, the first was postponed for discussion in the next one-month meeting of the National Assembly and the second was approved by the rubber-stamp parliament two days later, on June 12.

Most of the defendants were tried without their lawyers with exception of two defendants Nguyen Dinh Truong and Pham Van Linh, both 17 years old who received probation.

Police reportedly arrested 52 of them when they marched to the city’s central park. Later, police released 32 and kept them in custody from June 10 until the court day, over a month later.

In one-party Vietnam, the right to protest is technically enshrined in the country’s 2013 Constitution, but the communist regime treatsall spontanous demonstrationsasillegal. Those who engage in peaceful dissentfacearbitrary detention,judicial harassment in the form of political prosecution on charges of “causing public disorders” or “resisting state officials on duty,” which carrypunishmentsof up to seven years in prison. Prisoners of conscience routinely face torture.

Dozens of protestors across the nation since themid Junedemonstrationshave been sentenced to between ten and 42 months in jail.