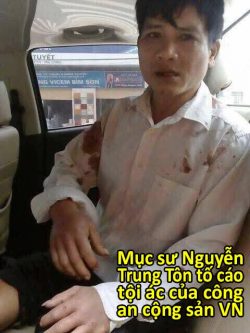 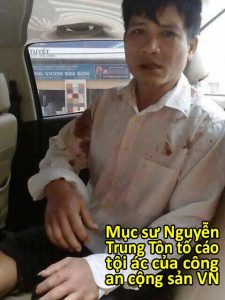 Authorities in the Dak Trung prison camp in Vietnam’s Central Highlands province of Dak Lak have denied to provide medical treatment for human rights defender and democracy campaigner Nguyen Trung Ton, who is serving his 12-year imprisonment in the facility, his wife Nguyen Thi Lanh has informed Defend the Defenders.

Mrs. Lanh said her husband made his phone call to her on October 22 to report the inhumane treatment of the prison camp against him, adding he is suffering from serious kidney stones, prostate and the injuries in his legs caused by plainclothes agents during their assault against him in February last year, five months before his second arrest.

Mr. Ton told his wife that he is with failing health and unable to walk owing to an untreated injury suffered in a beating in early 2017. He submitted his request for medical treatment more than one week earlier, however, the prison camp’s authorities remain silent, he said.

Mr. Ton, president of the unregistered group Brotherhood for Democracy (BFD) was arrested on July 30 last year and charged with subversion under Article 79 of the 1999 Penal Code, together with two other key members of the group named Pham Van Troi and Truong Minh Duc and Nguyen Bac Truyen, one of its co-founders but left the organization several years before being arrested.

In mid-2018, Mr. Ton was convicted and sentenced to 12 years in prison and three years of probation. After losing his appeal, he was transferred to Dak Lak, about 1,000 km from his native province of Thanh Hoa.

Along with being sentenced to lengthy imprisonments, Vietnamese activists have been treated inhumanely during their imprisonment, including being sent to prisons far from their families and denied of proper medical treatments.

Food quality in prison is very low while prisoners of conscience were subjects to enforced labor and solitary confinement. In addition, a number of them have been beaten and threatened by criminal inmates sent by prisons’ authorities who strive to break their mental strength and force them to admit false confession.

Authorities in Thanh Hoa have also been harassing his family after his conviction. Police have summoned his wife to police stations to interrogate her after she made interviews with foreign media about inhumane treatment against him, and sent thugs to throw dirty substances to her good stand in a local market. Police also robbed her once after she got small financial donation from people.

For more information about Mr. Ton, go to our website’s archive.