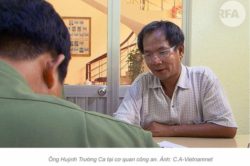 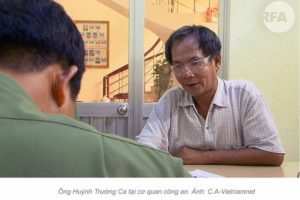 Mr. Huynh Truong Ca in police station after being detained on Sept 4, 2018

The police in the Mekong Delta province of Dong Thap have completed their investigation against local human rights defender and democracy activist Huynh Truong Ca (Facebooker Huỳnh Trương Ca), proposing the province’s People’s Procuracy to prosecute him on allegation of “Making, storing, spreading information, materials, items for the purpose of opposing the State of Socialist Republic of Vietnam” under Article 117 of the 2015 Penal Code.

According to its letter sent to his family, the province’s Police Department said the investigation results had been sent to the Procuracy.

Mr. Ca, 47, will face imprisonment of between seven and 12 years in prison, if is convicted, according to the current Vietnamese law.

He was arrested on September 4. He is a co-founder of the unregistered group Hiến Pháp (Constitution) which is striving to educatepeople abouthuman rights as well as political and civil rights by disseminating Vietnam’s 2013 Constitution among citizens. Its members were key figures in the mass demonstration on June 10 this year in Ho Chi Minh City which aimed to protest the Vietnamese parliament’s plan to approve two bills on Special Economic Zones and Cyber Security.

Ca has been held incommunicado since his arrest on September 4.

The arrest and prosecution of Mr. Ca and other members of the Hien Phap group are part of Vietnam’s ongoing crackdown on local dissent.

Since the beginning of 2018, Vietnam has arrested 26 activists, mostly with allegations in national security provisions such as subversion (Article 109), conducting anti-state propaganda (Article 117), disruption of security (Article 118) and abusing democratic freedom (Article 331).

Hanoi has convicted 39 human rights defenders and online bloggers, sentencing them to a total of 294.5 years in prison and 66 years of probation.

More arrests will be expected in coming months and especially from January 1 next year when the Law on Cyber Security becomes effective. According to international human rights groups and local critics, the law aims to silence online bloggers and Facebookers.