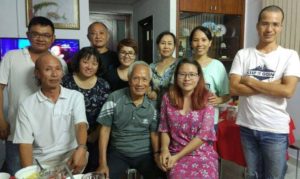 Participants of June 26 meeting in Saigon

Authorities in Ho Chi Minh City have barred former prisoners of conscience Le Cong Dinh and Pham Ba Hai from attending a meeting with other activists on the United Nations International Day in Support of Victims of Torture(June26), the victims said.

Mr. Pham Ba Hai, deputy director of Defend the Defenders and one of coordinators of the Former Vietnamese Prisoners of Conscience, said plainclothes agents stationed near private residences of the two activists, effectively placing them de facto under house arrest on Tuesday.

Police and thugs were also deployed to a cafeteria where Saigon-based activists and some victims of police’s torture on June 17-18 held talks, however, they stayed outside and did not disturb the event.

Prominent dissident Dr. Nguyen Dan Que, co-recipient of the 2016 Gwangju Prize for Human Rights was among the participants.

University student Truong Thi Ha, school teacher Nguyen Thanh Loan, and Catholic activist Nguyen Ngoc Lua, who were detained, interrogated and beaten by police on June 17-18, were invited guests of the event organized by the Former Vietnamese Prisoners of Conscience.

In the one-party Vietnam, police torture is systemic, according to Human Rights Watch. Local activists are subjects of arbitrary detentions, torture and kidnap while hundreds of ordinary people died in police stations nationwide in recent years from unclear circumstances, and the situation likely worsens.

On June 17, one week after tens of thousands of people rallied in HCM City to protest two bills on Special Economic Zones and Cyber Security, the local security forces arbitrarily detained hundreds of activists, ordinary citizens and tourists in the city’s center and took them to Tao Dan Park where they robbed them, interrogated and tortured for hours before releasing them in the late evening of Sunday or early morning of Monday.

The victims of the police torture on June 17 have been subjects of police’s harassments.

In response to Vietnam’s police suppression of peaceful demonstrators in recent weekds, Human Rights Watch issued a statement calling on Vietnam’s government to investigate and prosecute as appropriate any security personnel responsible for excessive use of force, arbitrary detention, or ill-treatment in custody in the wake of the protests. Any protesters being held unjustly should be freed, said the New York-based human rights organization.