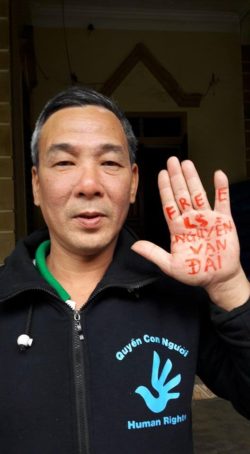 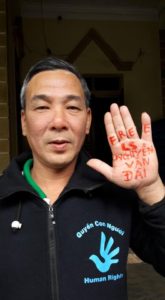 Theo People’s Court of Nghe An has decided to postpone the first-instance hearing of pro-democracy campaigner Le Dinh Luong scheduled on July 30, according to Mr. Ha Huy Son, one of his lawyers.

The Hanoi-based attorney told Defend the Defenders that he received a notice from the court via telephone on July 27 that the trial against Mr. Luong will not be carried out next week as Dinh Dang Manh, the second lawyer has requested.

Mr. Manh is currently in his trip to the US so he had filled a request for the trial cancelation.

Mr. Luong, a 53-year-old resident from Yen Thanh district, was arrested on July 24 last year on allegation of subversion under Article 79 of the country’s 1999 Penal Code.

He has been held incommunicado since being arrested until last week when his lawyers got approval from the People’s Procuracy to meet with him in Nghi Kim detention facility under the authority of the Nghe An province’s police to prepare for his defense.

Mr. Son conducted a meeting with his client on July 23 while Mr. Manh has yet to be able to come to the detention facility due to his busy schedule.

Mr. Luongis a veteran in the war against China’s invasion of Vietnam’s northern region in 1980s. State media reported that Mr. Luong is an extremely dangerous element belonging to the U.S.-based Viet Tan (Vietnam Reform Party) which is labeled by Vietnamese authorities as a terrorist organization.

According to the Nghe An police, Mr. Luong once called for boycotting the elections of the parliament and local People’s Councils while capitalizing on the environmental disasters caused by Formosa to cause social disorders and instigate demonstrations.

Mr. Luong himself was attacked by under-covered policemen in the Central Highlands province of Lam Dong in August 2015 when he visited Tran Minh Nhat, who then completed his sentence on alleged subversion. Many other activists were also beaten in that incident.After his detention, his relatives were also brutally beaten by police forces twice.

Thearrest of Luong is part of Vietnam’s intensified crackdown on local political dissidents, human rights advocates, social activists and online bloggers.Since 2017, more than 50 activists have been arrested and charged with vague articles in the national security provisions such as subversion and “conducting anti-state propaganda” of the Penal Code. Most of them have been convicted and sentenced to severe imprisonments up to 16 years in prison.

On July, Human Rights Watch issued a statement calling on Vietnam’s communist regime to drop all politically-motivated charges against Mr. Luong and release him immediately and unconditionally.

“Le Dinh Luong is facing prison for protesting the dumping of toxic waste and other environmental disasters that the government should be doing something about,” he noted.

“Vietnamese police routinely deprive detained rights activists and bloggers of access to lawyers and family members for months, and then only give their lawyers a very short time to prepare the case before trial,” Robertson said, adding “Fundamental change is needed in Vietnam’s justice system, but for the needed reform there is no light at the end of the tunnel.”