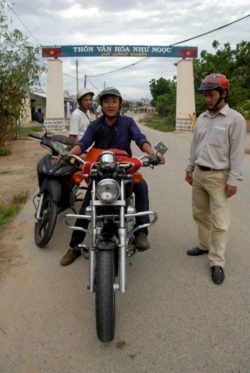 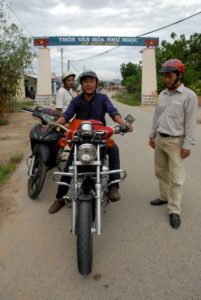 Police in Vietnam’s central province of Khanh Hoa have abductedlocal blogger Ngo Thanh Tu, releasing him after long-lasting interrogation and severe torture, the victim told Defend the Defenders on Saturday.

Police in Khanh Hoa abductedTu on the afternoon of August 30 and released him in late evening of August 31, holding him in custody for 31 hours without an arrest warrant, said the 35-year-old outspoken Facebooker.

Tu was abductedby the Cam Ranh City’s police at 3 PM onThursday whilehe and his girlfriend were riding his motorbike. Four plainclothes agents on three motorbikes stopped their vehicle at Dong Lac junction and forced him to go with them but let the girl go home with his motorbike.

The policetook him to the headquarters of the Cam Ranh City’s Police Division where officers in civil clothes asked him about the Facebook account namedNgo Thanh Tu. When Tu did not admitthatthe account belongs to him, police officers beat his head, abdomen, back,and other parts of his body. Several officers held him and one plumbed water into his nose, Tu said.

Police officer Dong, the head of the city’s security unit, started to beat him and later other officers took part in the torture, the victim said.

Police repeatedly beat Tu until 7 PM and they transferred him to the headquarters of the Khanh Hoa province’s Police Department where he was interrogated by other police officers about postinga document from the local party’s organization on hisFacebook account Ngo Thanh Tu. The posted document is an instruction on measures which aim to deal with social disatisfaction.

During the 17-hour interrogation from 8 PM August 30 to 8 PM the next day, police asked T how he had got the leaked information and posted on his Facebook account. He was not tortured during questioning, he noted.

Tu was returned to the Cam Ranh City’s police at around 8.30 PM August 31 where he was asked to give his cell phone to police officers. When he refused, police officers beat him again and confiscatedhis phone.

Later, they gave him VND200,000 ($9), saying he can use the money for a taxi, and forced him to go out of the car. When he was outside, police officers beat him for the last time before leaving.

Tu said he arrivedhome at 10.30 PM onAugust 31, with many injuries on his body.

Tu used his friend’s phone to contact Defend the Defenders, as his phone had been takenand his Facebook account and other accounts on social networks hacked and controlled by Khanh Hoa police.

Tu is among many activists who have been abducted, arbitrarily detained,and tortured by police and plainclothes agents in the last few years.