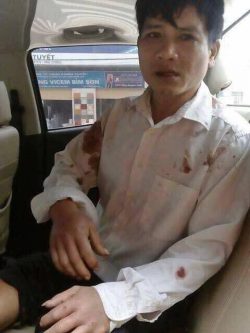 Vietnamese Activist and His Friend Kidnapped, Tortured and Robbed in Central Region

Mr. Ton after being kidnapped, tortured and robbed by plainclothes agents in Quang Binh-Ha Tinh on Feb 27

On February 27, Protestant pastor Nguyen Trung Ton, president of Brotherhood for Democracy, and his friend Nguyen Viet Tu were kidnapped, beaten and robbed by plainclothes agents of the central provinces of Quang Binh and Ha Tinh, Mr. Ton informed Defend the Defenders.

On Sunday, the duo went to Ba Don town in Quang Tri to meet with local activists. Arriving at the location at around 9:00pm on Sunday, they were kidnapped by local plainclothes agents who travelled in a seven-seat car. The kidnappers beat the duo, covered their heads with cloth and forced them into the car. After a several hour journey, they stopped the car in Ha Linh commune, Huong Khe district in the neighboring province of Ha Tinh.

During the journey, in a remote area of Ha Linh, the kidnappers beat them with iron bars, robbing them of all their belongings. Finally, they released them during the cold night in the mountainous region. When they left, Mr. Ton tried to recognize the car registration number, however, the kidnappers had covered it in mud.

Suffering from numerous injuries, Ton and his friend sought refuge in the house of forest farmers, who provided them with food and clothes and helped them contact Mr. Ton’s family. The next morning, the duo took a taxi and returned to Thanh Hoa where Ms. Ton lives.

Mr. Ton was a prisoner of conscience. He was arrested in 2011 and sentenced to two years in prison on charges of “anti-state propaganda” under Article 88 of the Penal Code. Released in early 2013, he has continued to fight for human rights and multi-party democracy. Recently, he was elected as the head of the Brotherhood for Democracy, which was co-funded by prominent human rights lawyer Nguyen Van Dai, who was arrested late 2015 on allegations of “anti-state propaganda.”

In recent years, Mr. Ton and his family have been constantly harassed by local authorities in Thanh Hoa province. In addition to publicly defaming him through local media, the radio and loudspeakers in his neighborhood, plainclothes agents have disrupted the business of his wife at a local wet market. They even destroyed her booth of seafood products.

In addition to arresting and charging local activists with controversial, national security provisions such as Articles 79, 87, 88 and 258 of the Penal Code, Vietnam’s government has deployed other tactics to discourage political dissidents, social activists and human rights defenders from continuing their work, including kidnapping, torturing and robbing.

Many activists, including Nguyen Trung Truc and Mai Van Tam from Quang Binh, Nguyen Cong Huan from Nghe An, and Nguyen Ho Nhat Thanh from Ho Chi Minh City, were kidnapped, beaten and robbed after being taken away from plainclothes agents.

Physical attacks by police and plainclothes agents are on the rise in Vietnam. Nationwide, as many as 140 activists were physically attacked by Vietnam’s security forces in 2016 compared to 65 in 2014 and 125 in 2015, according to statistics of the Former Vietnamese Prisoners of Conscience.

Ho Chi Minh City, Hanoi, Thai Binh, Nghe An, Ha Tinh, Gia Lai and Lam Dong were the localities where local police showed the highest level of brutality and disrespect for the rule of law by frequently resorting to arbitrary detention.

Report on the kidnapping, torture and robbery inflicted to Pastor Nguyen Trung Ton