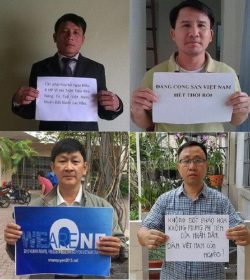 On June 4, the Higher People’s Court in Hanoi rejected appeals of three senior members and one co-founder of the Brotherhood for Democracy, sending them back to prison, Defend the Defenders has learned.

After the first-instance hearing, only four activists appealed their sentences while Nguyen Van Dai and Le Thu Ha did not because they were tired of being in pre-trial detention and they do not expect that their sentences would be reduced in the appeal hearing.

The decision of the Higher People’s Court in Hanoi is likely the final decision if the Supreme People’s Procuracy has no objection, according to the current Vietnamese law.

Mr. Nguyen Van Dai and Ms. Le Thu Ha were arrested on December 16, 2015 on charge of “conducting anti-state propaganda” under Article 88 of the 1999 Penal Code.

On July 30, 2017, Vietnam’s authorities arrested the four others, and charging them as well as Nguyen Van Dai and Le Thu Ha with subversion.

In the appeal hearing, the wives of the four activists were allowed to enter the court room while diplomats from the US, the EU and Germany were watching the hearing from TV screen in adjacent room, similar to the first-instance hearing. Hanoi’s authorities sent plainclothes agents and militia to private residences of local activists to prevent them from gathering in the court’s areas and blocked all the roads leading to the courtroom, observers said.

The arrests and convictions of the six activists met strong international and domestic condemnation. The EU and many of its members, the US, Australia and international human rights organizations issued statements to criticize Vietnam’s move, saying by convicting them, the communist regime in Hanoi violates international obligations on human rights. They also urged Hanoi to immediately and unconditionally release the convicted activists.

After convicting the six activists, Vietnam also jailed three other members of the Brotherhood for Democracy namely Nguyen Van Tuc and Tran Thi Xuan, also charged with subversion, and Vu Van Hung in a trumped-up politically case of inflicting injuries.

Vietnam is expected to try Spokesman Nguyen Trung Truc of the Brotherhood for Democracy soon. Truc was arrested last year and charged with subverion.

The arrest and convictions of senior members of the Brotherhood for Democracy are part of Vietnam’s ongoing crackdown on local dissent starting from late 2015. Since the begining of 2017, Vietnam arrested around 50 activists on allegations of the national security provisions in the Penal Code, and more than 40 of them have been convicted, sentenced to heavy sentences between three and 16 years in prison.

Vietnam has arrested four activists so far this year. Many members of the Brotherhood for Democracy have been forced to go into hiding in the nation or neighboring countries to avoid being arrested, Defend the Defenders has learned.