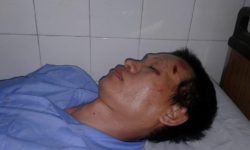 Over 100 People Arrested, Tortured in HCM City on Sunday amid Efforts to Halt Public Protest

Security forces in Ho Chi Minh City detained more than 100 local residents in a bid to prevent public demonstrations which aim to protest the bill on Special Economic Zones and the approval of the law on Cyber Security.

Nguyen Ngoc Lua, a Catholic follower and pro-democracycampaigner, said she was caught by a group of plainclothes agents after leaving the Saigon Notre Dame Cathedral Basilica located in District 1.

She was dragged into a police car and taken to a police station where police keep dozens of other residents.

All detainees in the station were subjects to police torture before being interrogated, Lua said, adding police used their fists and batons to beat detainees, including women. The bodies of the detainees were covered with blood, she noted.

The way police officers treat detainees is inhumane and shocking, she said, adding not all people detained by police were activists and that many were juststreet vendors, ordinary citizens and tourists.

Their belongings were confiscated, she noted.

In a video footage, Lua witnessed police officers beating activist Trinh Toan. When Toan objected, they took him in a closed room where they continued to beat him. Later, they released him but he collapsed at a door. About 30 minutes later, he was taken to a hospital wherecheck-up results showed that he suffered from brain injuries. His wife, pro-democracy activist Nguyen Thanh Loan, was also arrested and beaten by police.

Lua was released inthelate hours of June 17 after lengthyinterrogation and torture.

According to unofficial information, police in HCM City arrested 179 people on Sunday, including 77 womenand 102 men. Lua said two Australian citizens were among detainees.

Authorities in Hanoi, Ho Chi Minh City,and other cities continued to deploy larges numbers of police and militia and even military units in some localities to patrol streets during the week and the two days of the weekend in a bid to prevent public protests after the country’s highest legislative body National Assembly passed the law on Cyber Security.

Police, including riot police and under-cover, and militia deployed in major streets in cities’ centers. In Hanoi and HCM City, many walking streets and parks were closed for public and other were blocked with baricades. Security forces were ready to detain any individuals and groups whom police suspected of having signs of attempts to hold public protests.