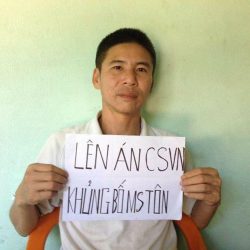 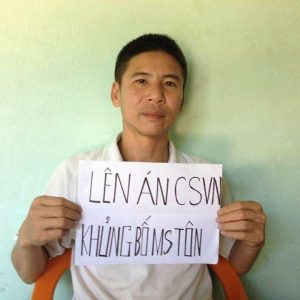 The People’s Court of Vietnam’s central province of Quang Binh has unexpectedly decided to postpone the trial against Nguyen Trung Truc, the spokesman of the unsanctioned group Brotherhood for Democracy which was set on August 17, said his lawyer Nguyen Van Mieng.

The Ho Chi Minh City-based attorney said that Tran Huu Sy, the judge of the trial, informed him by telephone on August 12 without saying the reason for delaying.

The first-instance hearing of Mr. Truc is likely to be held in mid-September and the court will send written notice to his family and lawyer by post, the judge told the lawyer.

Mr. Truc, 44, was arrested on August 4, 2017 and charged with “carrying out activities to overthrow the people’s administration” under Article 79 of the country’s 1999 Penal Code.

He had been kept incommunicado since being detained until recently when he was permitted to meet with his lawyer to prepare for his defense.

During the past 12months, his family has been permitted only to send him some additional food. Like in other political cases, his lawyer has not been allowed to attend interrogations.

Truc has been active in promoting human rights and multi-party democracy in Vietnam, as well as assisting fishermen who are affected by the environmental disaster in the central coastal region started in May 2016 as a result of the illegal discharge of a huge amount of toxic industrial waste by the Taiwanese Formosa steel plant located in the central province of Ha Tinh.

He has been harassed by Vietnam’s security forces, including kidnappingin 2016 when plainclothes agents abducted him and seven others, bringing them to remote areas in Ha Tinh province where they robbed and tortured them before leaving them in a forest area. The assault was reported by Defend the Defenders and Human Rights Watch.

The Brotherhood for Democracy is one of the main targets of the ongoing crackdown of the Vietnamese government on local dissent.In 2017, Vietnam arrested more than 40 activists in 2017 and has detained seven government critics so far this year.

Hanoi has also convicted 20 activists to date, with a total 158 years in prison and 45 years under house arrest, according to Defend the Defenders’ statistics.