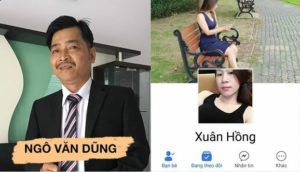 Citizen journalist Ngo Van Dung from Vietnam’s Central Highlands province of Dak Lak is still missing nine days after his detention as police have denied to inform his family about his situation.

Mr. Dung, 49, was reportedly detained by police in Ho Chi Minh City on September 4 when he had conducted a live stream on streets in District 1.

Informed by his friends about his detention, his family tried to contact him by his cell phone number but received only one message from his number afternoon of the same day saying he was arrested by police from Ben Nghe ward, District 1.

Dung’s family went to the HCM City’s Police Department and the District 1’s Police Division to ask about him, however, the two agencies denied of holding him. Police from Ben Nghe ward said he was transferred to Tao Dan Park temporary detention facility in Ben Thanh ward, however, police in Ben Thanh ward said they do not keep any detainee but send to their localities.

Some friends told his wife Nga that he was deported to their home province, however, police from Dak Lak denied the information.

On September 11, an officer from the Ben Thanh ward’s police station told his wife that her husband is likely transferred to the temporary detention under the authority of the city’s Police Department. She went to the department but received negative answer.

Ms. Nga and their family are very concerned about Mr. Dung, given many cases in which detainees were tortured to death in police stations nationwide in the last few years.

This is the second detention of Mr. Dung this year. In mid-March, he was detained together with fellow Nguyen Uyen Thuy when they were covering news on the demonstration of sacked school teachers inDak Lak. Police took the two activists into custody for interrogation for hours and released them on late afternoon of the same day. However, they confiscated their cell phones the activists used for filming the demonstration, and later imposed them administrative fine of VND2 million ($90) for causing public disorders.

Ngo Van Dung and Nguyen Uyen Thuy are members of the Vietnam Reviving Campaign which works for free press in the communist nation.

Last year, Vietnam arrested three members of the campaign namely Vu Quang Thuan, Nguyen Van Dien and Tran Hoang Phuc and in late January this year convicted them on allegation of “conducting anti-state propaganda” under Article 88 of the country’s 1999 Penal Code. Thuan was sentenced to eights years, Dien to six years and six months and Tran Hoang Phuc to six years in prison and a total of 13 years under probation afterward. Human Rights Watch has called on Vietnam to release the trio immediately and unconditionally, saying they were convicted just for exercising their right to freedom of expression enshrined in the country’s 2013 Constitution.

Meanwhile, the fates of many other activists who were detained by police in HCM City on early September, including Doan Thi Hong and Do The Hoa, and Ngo Hoang Chuc remains mysterious as police have yet to inform their families about their detentions and possible charges.