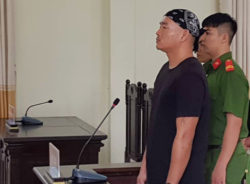 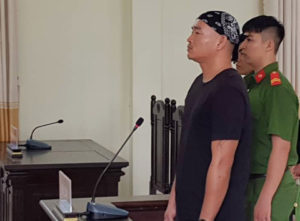 Facebooker Nguyen Hong Nguyen at the trial against him on September 22, 2018

Vietnam has imprisoned two Facebookers on allegation of “Abusing democratic freedoms to infringe upon the interests of the State, lawful rights and interests of organizations and/or citizens” under Article 331 of the country’s 2015 Penal Code amid the government’s increasing crackdown on online speech.

According to state media, Facebookers Nguyen Hong Nguyen, 38, and Truong Dinh Khang, 26, were convicted in separate trials conducted by the People’s Court of Cai Rang district, Can Tho City. The first was sentenced to two years in prison while the second was given one year in jail.

According to the Cong an Thanh pho Ho Chi Minh (Ho Chi Minh City Police) newspaper, since 2017, Nguyen Hong Nguyen had produced and posted a number of articles on his Facebook account Nguyên Hồng Nguyễn (Bồ Công Anh) which defame the ruling Communist Party of Vietnam and its government. He was said to share articles from others which are harmful for the government.

Meanwhile, Khang was said to start posting and sharing 31 anti-state articles since July 2017 on her Facebook account Hồ Mai Chi. 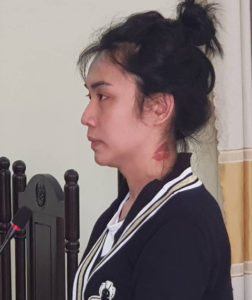 Facebooker Truong Dinh Khang at the trial against her on Sept 22, 2018

The newspaper said the two blogger admitted their wrongdoings.

According to Tieng Dan online dissident newswire,  Mr. Nguyen came back to Vietnam in 2002 after living many years in Australia. He had shared numerous Facebook statuses about Vietnam’s issues and unjustice on his account and this is the reason for his detention on June 16, 2018. Police were said to search his house and confiscate his cell phone and later release him on bait.

Authorities in Cai Rang district decided to prosecute him on July 10 on allegation of “Illegal provision or use of information on computer networks or telecommunications networks” under Article 288 of the 2015 Penal Code, and ban him from going out of his area.

In the first-instance hearing, Nguyen had no lawyer to defend for him, activists said.

The convictions of Mr. Nguyen and Ms. Khang are part of Vietnam’s ongoing crackdown on dissidents and online bloggers. In the past three months, Vietnam imprisoned 14 activists and Facebookers and charged three of them with “abusing democratic freedom” under Article 331, three with “Making, storing, spreading information, materials, items for the purpose of opposing the state” under Article 117 and one with “Activities against the people’s governmen” under Article 109 of the 2015 Penal Code. The seven remaining were held without announcing allegations against them.

The communist government has imprisoned 36 activists and bloggers so far this year, with a total imprisonment of nearly 220 years in prison and 56 years of probation.

In September, it convicted environmentalists and democracy campaigners Le Dinh Luong and Nguyen Trung Truc, and anti-corruption fighter and citizen journalist Do Cong Duong. Mr. Luong was sentenced to the record high imprisonment of 20 years in prison while Truc was given 12 years and Duong- four years in prison.

According to Now!Campaign, a coaliation of 14 domestic and international civil organizations such as BPSOS, Defend the Defenders, Civil Rights Defenders and Front Line Defenders, Vietnam is holding 228 prisoners of conscience.

Vietnam’s Internet environment is no longer safe for local activists and bloggers who try to warn the domestic public and the international community about the country’s problems, including systemic corruption, serious environmental pollution and the government’s weak response to China’s violations of the country’s sovereignty in the South China Sea.

Vietnam’s online suppression is expected to be harder when the Cyber Security becomes effective in January 1 next year. The law approval by the rubber-stamped parliament is opposed strongly from local activists and international community. In mid-June, tens of housands of Vietnamese rallied on streets in key cities to protest two bills Special Economic Zones and Cyber Security.

Vietnam has been near the bottom of RSF’s World Press Freedom Index for years and is currently ranked 175th out of 180 countries.