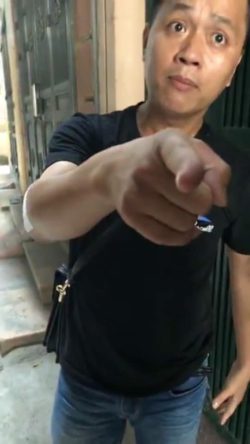 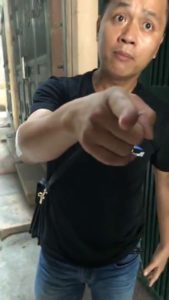 On October 28, authorities in Vietnam’s capital city of Hanoi are sending plainclothes police officers to station near private residences of many local activists in a bid to prevent them from going out for unknown reason.

One of the victims, La Viet Dung’s mother was beaten by policemen when Dung questioned the legelity of the blockage against him by the Dong Da district’s police.

When Dung and his mother requested explanation from the plainclothes agents and asked them not to block him from going out, policeman Duy slapped his mother, according to his video.

Land rights activist Trinh Ba Tu recognized that the policeman named Duy was the officer who beat him in Dong Da district’s police station on April 5 this year when the People’s Court of Hanoi held the first-instance hearing against six key members of the unsanctioned group Brotherhood for Democracy.

University lecturer Dao Thu was also barred from going to her university where she had a meeting with her students.

In all cases, plainclothes police officers said they work under direction of their unit heads, however, they fail to show any legal documents to prove that when being questioned by their victims.

The reason for blockages is likely to prevent Hanoi-based activists from gathering to mark the 7th anniversary of No-U football club established by activists who rallied on Hanoi’s streets in 11 consecutive Sundays in mid-2011 to protest China’s invasion of Vietnam’s sovereignty in the South China Sea.

In the past years, authorities in Hanoi strived to disperse activists from No-U’s birthday parties, using plainclothes agents and thugs to attack participants.

Mr. Dung, a well-known dissident and a member of No-U football club. He is one of activists who have been placed de facto house arrest in many occasions, especially when the local authorities think that local dissidents may gather together to hold public protests.

He was attacked twice by plainclothes agents for his activities which aim to protect the country’s sovereignty and promote human rights and democracy.

He is also among more than one hundred of activists blocked from international trips.