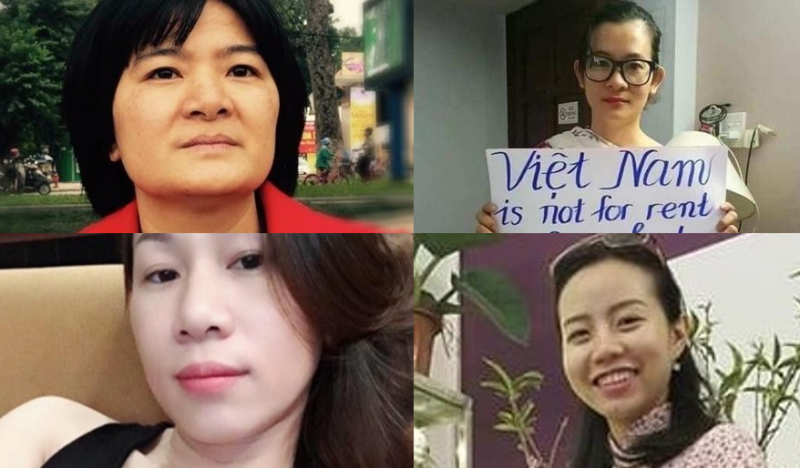 The different faces of gender equality in Vietnam politics

This article was originally published on The 88 Project, an independent news site covering Vietnam, and an edited version is republished on Global Voices as part of a content-sharing agreement.

The Vietnamese government boasts about its achievements in pursuing gender equality. Referring to the ratio of women representatives in the Vietnam National Assembly, which stands at 27 per cent, the government insists on its myth of the progressive development of Vietnamese politics and sometimes even its superiority over other countries in this area. However, such an assertion is deceptive and dangerous, as shown by evidence from the actual power distribution of the state and examples of how the regime treats single mother activists and independent women’s associations.

The number of Vietnamese women in the National Assembly is, indeed, impressive. Considering that the U.S. political body only has 23 per cent participation of women in both of their chambers, followed by the Republic of Korea with 19 per cent, and Japan with just 10 per cent, one might argue that the Vietnamese government is doing wonders in improving and promoting women’s voices in politics.

However, such a depiction is misleading. As pointed out by Luat Khoa, the true power picture of Vietnam does not start with the National Assembly. The body is just a “rubber stamp” for the Vietnamese Communist Party (VCP) to try to legitimize its top-down decisions via a pseudo organ of popular sovereignty. The right places to analyze the power structure of Vietnamese politics are the Central Committee and the Politburo, and of course, the regime’s “troika”– the party’s general secretary, state president, and prime minister. None of them shows that Vietnam has evolved in gender equality.

The record of women delegates on the Central Committee is 9.5 per cent, just one-third of the National Assembly (equivalent to 19 out of 200). Women only have one seat in the Politburo (out of 18 seats), and none in the troika power of the Communist Party. If we look at these “real” numbers, the actual development of gender equality in Vietnam is quite stagnated.

Yet this is just one layer of the story.

Exploring The 88 Project’s database, nine out of 26 activists arrested in 2020 were female. That is a surprising 1:2.8 ratio against the male counterparts. Even in 2018, the most serious year of state persecution against human rights defenders in recent years, women activists still accounted for 20 per cent of all the arrests. The 88 Project has also documented a record number of female activists who faced administrative fines and other forms of harassment. From former political prisoners to the wives of jailed activists to ordinary citizens, many women have been subjected to mistreatment and harassment one way or another. According to our research, 22 per cent of at-risk activists in Vietnam are women.

Mistreatment of activists who have children

The 88 Project has also collected extensive evidence showing the unfair, unlawful and inhumane treatment by the authorities against female activists.

Consider the case of Doan Thi Hong. Hong is a single mother based in Binh Thuan Province. She was said to have participated in the national demonstrations against the bills on special economic zones and cybersecurity on June 10, 2018. Besides this, she was reportedly also a member of the Hien Phap (Constitution) group, which aims to promote people’s understanding of their human rights in the 2013 Constitution.

The 2015 Criminal Code and Criminal Procedure Code of Vietnam specifically assert that pre-trial detention will not be applied to women who have children under 36 months old at the time of their arrest. Concerning national security crimes, unless there are clear and convincing indications that without pre-trial detention such a person would severely affect public order and national security, a mother cannot be subject to this detention mechanism and does not have to begin serving her sentence until her child reaches the appropriate age.

In the case of Hong, although she, along with members of the Hien Phap group, only called for a peaceful demonstration, they were treated as if they had planned to violently overthrow the regime. Hong was denied her legal rights and separated from her toddler. In our interview with her sister, Doan Kim Khanh, she said that while she was outside taking care of the toddler and advocating for Hong’s release, she was contacted by Hong from the prison and was able to meet with her there. Hong reportedly specifically asked Khanh not to fight for her rights.

Hong contended that my actions outside will only worsen her condition. The officers warned her that a crime against national security is very serious, that she should think about the future of her daughter.

With no counsel from lawyers, and barred from contacting the outside world, Hong’s reaction and concern for her daughter are understandable. She was later sentenced to two and a half years in prison with two years of probation; Hong was released from prison this March.

The examples of mistreatment continue with Tran Thi Nga’s case. Nga was once a prominent activist in Vietnam, and one of the founders of Vietnamese Women for Human Rights, a non-governmental group. To punish her for her outspoken activism, the authorities sentenced her to more than nine years in prison back in 2018 for her online writings deemed “propaganda against the state.” Nga was deprived of seeing her sons for over 15 months, half of her time in prison, and was also repeatedly physically attacked and given death threats by cellmates from August to October 2018. The constant physical and psychological pain and a desire to protect the well-being of her family are the reasons Nga had to choose to go into exile from the country, where she lives in exchange for early release from prison and her agreement to leave Vietnam.

Recently, Green Trees environmental activist Cao Vinh Thinh accused the government of pressuring her landlords to evict her from her rented house and business location. Accompanying Thinh, a single mother, was her seven-year-old daughter, who also had to endure the eviction and harassment. Thinh has not participated in any political activities recently. The action of local authorities seems meant to force her into a corner until she cannot sustain her livelihood.

The arrest and treatment by local authorities of activist Dinh Thi Thu Thuy are also worrisome. For criticizing several policies of the Vietnamese government during the “national war” against COVID-19, Thuy was treated as a dangerous criminal. Her pre-trial detention lasted over eight months, and she was held incommunicado while her 10-year-old son had to live with his grandmother. For mere online commentaries, Thuy was sentenced to seven years in prison. It means that her son will go through his primary and secondary school education without his mother.

The invisibility of women’s alternative associations

In Vietnam, the formation of an association must strictly follow the rules set down by the Communist Party. A new association cannot compete in the same sphere of influence as established associations. Therefore, since there is already a Vietnamese Women’s Union, no other women’s association can register. The requirement effectively creates a monopoly even in social welfare and activism. In reality, however, the Vietnam Women’s Union is essentially subordinate to the Party rather than an association working for the rights and benefits of women.

This is why the independent group Vietnamese Women for Human Rights (VWHR) was quickly denounced as a “reactionary force.” It was deemed an unlawful association by the Indoctrination Committee of the Communist Party of Vietnam on the state-run channel National Defense Television on July 4, 2020, with no legal explanation. This also explains why the country’s only recognized women’s association has played no role in stopping the arbitrary arrests of female activists, the strategy of using their children as bargaining chips to obtain confessions, or in supporting distressed women activists.

The situation is a result of decades of systematic suppression against dissidents and independent political activities in Vietnam. Thus, we do not expect that any gender-particular or separate effort can effectively improve the conditions. Women’s rights alone cannot be advanced if the overall democratization process is stalled and the human rights movement faces constant crackdowns. However, the Vietnamese government should first honor its commitment to Article 7 of the Convention on the Elimination of All Forms of Discrimination against Women (CEDAW), ensuring that all Vietnamese women enjoy the right to participate in non-governmental organizations and associations concerned with the public and political life of the country. Independent gender-specific initiatives and women-led organizations are the keys to a radical and successful reformation of both public and state prejudices against the role of women in political and civic life.