Trang chủ > Genera news > FIDH denounces detention of dissidents, use of the death penalty and violations of freedom of expression in Vietnam

FIDH denounces detention of dissidents, use of the death penalty and violations of freedom of expression in Vietnam 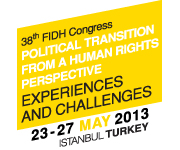 38th Congress of the International Federation for Human Rights (FIDH)

ISTANBUL, Turkey, 27 May 2013 (VCHR) – Representatives of 178 non-governmental organizations from 117 countries in Africa, Asia, the Americas, Europe and Oceania, gathering in Istanbul, Turkey from 22-27 May for the 38th Congress of the International Federation for Human Rights(FIDH) adopted an Urgent Resolution on Human Rights in Vietnam.

FIDH members denounced the crackdown on freedom of expression in Vietnam, in particular the recent sentencing of University student Nguyen Uyen Phuong and computer engineer Dinh Nguyen Kha to six and eight years in prison for “anti-State propaganda” on 16 May 2013. The Resolution called for their immediate release, as well as that of Buddhist monk Thich Quang Do, bloggers Dieu Cay, Ta Phong Tan, Phan Thanh Hai and other dissidents.  Condemning censorship of the media, including foreign television news channels, the use of the death penalty and new methods of execution in Vietnam, the FIDH denounced Vietnam’s bid for membership of the UN Human Rights Council in 2014-2016.

Just as this Resolution was adopted, well-kown blogger Trương Duy Nhất, 49, was arrested in the central city of Danang. Accused of“abusing democratic freedoms to encroach upon the interests of the State” (Article 258 of the Criminal Code), he risks up to seven years in prison. His arrest illustrates the ongoing crackdown on bloggers described in the 2013 report published jointly by the FIDH and the Vietnam Committee on Human Rights, “Bloggers and Netizens Behind Bars: Restrictions on Internet Freedom in Vietnam” (in English, Frenchand Vietnamese). An updated edition of the report in French was released at the Congress in Istanbul.

Founded in 1922, the FIDH is France’s oldest and largest human rights organization, with 178 member organizations in more than 130 countries around the world. The Vietnam Committee on Human Rights’ Executive Secretary Vo Tran Nhat represented Vietnam at the Congress.

The International Federation for Human Rights (FIDH), meeting at its 38th Congress in Istanbul, Turkey,

Whereas Vietnam persistently invokes vague and broadly-defined “national security” provisions in the Criminal Code such as “spying”, “anti-State propaganda”, activities “aimed at overthrowing the people’s power”, or “abusing democratic freedoms and rights” in order to silence dissidents, human rights defenders and ordinary citizens who simply take part in demonstrations;

Whereas a recent example is the sentencing of University student Nguyen Phuong Uyen (21 years old) and computer technician Dinh Nguyen Kha (25) at an unfair trial on 16 May 2013 to respectively six and eight years in prison followed by three years house arrest simply for writing poems and distributing leaflets critical of the government;

Whereas at least 100 people are condemned to death each year in Vietnam, and over 500 prisoners are currently detained on death row in unbearable, inhumane conditions; following the EU’s ban on exporting substances for lethal injections, Vietnam has adopted a decree authorizing the use of a mixture of “domestic poisons” for lethal injections, the effects of which are still uncertain;

Whereas, constrained by Decision 20/2011/QD-TTg which requires the simultaneous translation into Vietnamese of all films and documentaries shown on TV, several TV operators, including the joint company Canal+ (France) and VTV (Vietnam) have withdrawn major information channels such as CNN, BBC, CNBC, NHK World or ChannelNewsAsia from their package offer;

Whereas many dissidents are detained in prison and others are held under house arrest for extremely long periods, such as Thich Quang Do, head of the Unified Buddhist Church of Vietnam (UBCV, (independent Buddhist organization, banned by the authorities since 1981), who has spent the past 30 years in detention;

Regrets that Vietnam has not declared a moratorium on capital punishment as a first step towards total abolition of the death penalty;

Denounces the Vietnamese authorities’ censorship policies and savage repression (police crackdowns, harassments, unfair trials) which have created a climate of fear in which citizens dare not express themselves, and which have blocked the free flow of information by imposing technical or cultural dictates, such as requiring simultaneous interpretation of information channels into Vietnamese;

Calls upon Vietnam to immediately and unconditionally release all citizens detained for the legitimate and peaceful exercise of their fundamental human rights, such as Buddhist monk Thich Quang Do, bloggers Dieu Cay, Ta Phong Tan, Phan Thanh Hai, and Nguyen Phuong Uyen and Dinh Nguyen Kha ;

Urges Vietnam to collaborate sincerely with the United Nations to promote human rights, especially by inviting UN special procedures such as the UN Special Rapporteurs on Freedom of Expression and Human Rights Defenders to visit Vietnam; as a priority, Vietnam must follow up its invitation to the Special Rapporteur on Freedom of Religion by urgently fixing the date of his visit;

Denounces Vietnam’s bid for a seat on the UN Human Rights Council in 2014, which is incompatible with its abysmal human rights record, and urges the UN General Assembly to reject Vietnam’s candidacy ;

Calls upon the European Union to insist that Vietnam upholds its obligations to respect human rights; in particular, the EU should undertake a human rights impact assessment on Vietnam before it pursues negotiations on the EU-Vietnam Free Trade Agreement.