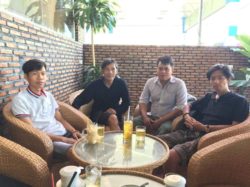 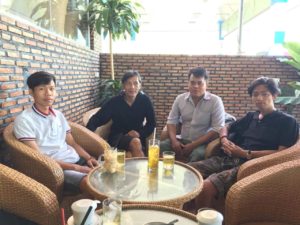 Authorities in Ho Chi Minh City have charged young activist Huynh Duc Thanh Binh with “Activities against the people’s government” under Article 109 of the country’s 2015 Penal Code, his mother told Defend the Defenders.

Speaking with Defend the Defenders, Mrs. Nguyen Thi Hue said that on August 6, she received a written announcement from HCM City’s Police Department which says the allegation was made on July 25, 18 days after his arrest.

Police told her that her son will be kept incommunicado in the next four months for investigation, and the pre-trial detention may be extended to 16 months according to the country’s Criminal Procedure Code. Binh has been held at Phan Dang Luu 4 Temporary detention facility under the authority of the city’s Police Department.

If is convicted, Binh faces life imprisonment, even death penalty, accordign to the current Vietnamese law.

Binh, 22, was detained on July 7, together with his friends namely Michael Nguyen Minh Phuong, a US citizen, Thomas Quoc Bao and Tran Long Phi by security forces in HCM City when they returned from a tour to Hue and Danang. Bao reportedly escaped from police and now is hiding somewhere.

On the next day, police also detained Binh’s father, Mr. Huynh Duc Thinh, saying he will face allegation of covering activities of his son.

Ms. Hue said she is allowed only to supply food and other stuffs for Binh and Thinh, with whom she divorced.

Binh’s arrest is said to be related to his membership of the unregistered “Vietnam Uprising” which aims to overthrow the Vietnamese communist regime.

It is unclear whether Vietnamese American Phuong and his Vietnamese friend Phi will be criminally charged or not.

Last week, the family of the Vietnamese American issued a statement calling on Vietnam to release him immediately and unconditionally.